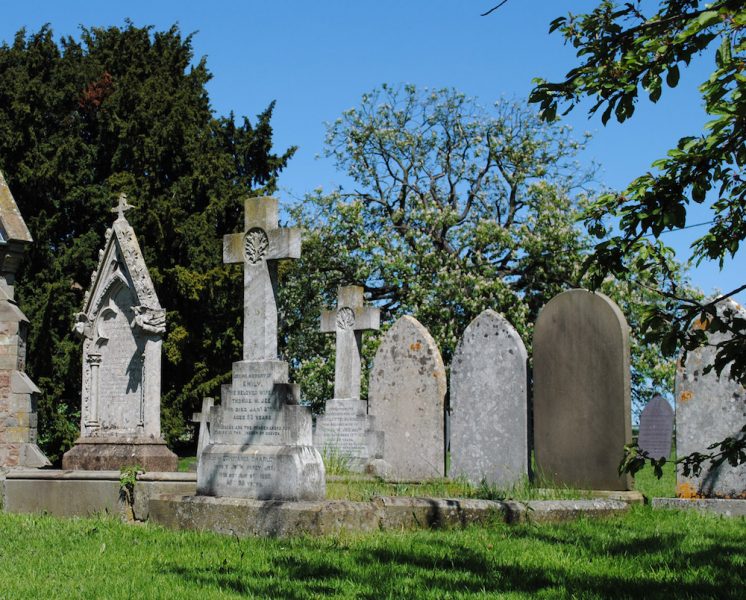 Whenever I get the chance, I love to wander around old churchyards. I don’t have a macabre or Gothic fascination with graveyards, but I am intrigued by the inscriptions on old gravestones that tell so much about the past.

I get special delight from finding odd and eccentric memorials such as the one in Brightling, Sussex where Mad Jack Fuller had himself entombed in a pyramid. Inside, so it is rumoured, his corpse is seated in a chair with a glass of wine in his skeletal hand.

More normally squires, indeed generations of squires, are laid to rest in grand ancestral vaults with achievements and decorations listed. By contrast one might find a sad row of children’s graves with mawkish Victorian inscriptions. Search around in the long grass at the end of the churchyard that is left to nature and one might come across an inscription telling of young women who died in childbirth, or fathers dying prematurely leaving young families to be cared for by parish charity. Sometimes quite bizarre tales are recorded, like that of a Malmesbury barmaid who was the first person in England to be killed by a tiger.

A whole history of a community can be discovered through the sheer variety of graves to be found in an old churchyard.

Future generations I fear will not have such fun and not just because so many people these days opt for cremation and for their ashes to be scattered. But wander through our modern burial plots and everything is now so dull and uniform. Current church and municipal regulations are notoriously strict and any attempt at novelty or humour is censored. A little while ago a church court even refused grieving parents permission to place a Thomas the Tank Engine headstone on their young son’s grave.

The Church of England rule book stipulates the size of headstones, their colour, their shape, the materials to be used and even what is to be be permitted to be written on them. There can be few clergy who have not had the heart-breaking duty of explaining to relatives why they cannot have the memorial they had planned. The regulations enshrine arbitrary standards of middle-class taste and style designed to prevent churchyards becoming filled with vulgar and ostentatious memorials and littered with cheap and tatty ornaments.

Yet what is lowbrow and tatty to some, brings comfort to others. Roadside shrines that are so often established at the sites of fatal accidents are decorated in all kinds of ways. Cellophane wrapped flowers, colourful teddy bears and hearts draped with plastic ribbons; nothing that would ever be allowed in a churchyard. Indeed when such items do appear on graves families have been known to receive curt letters telling them to remove them. In 2014 a local newspaper in Coventry reported that at one church in the city families were ‘outraged after being told to remove trinkets and ornaments from their loved ones’ graves – or face seeing them binned.’

Popular taste often clashes with the middle class standards so often enshrined in rules and regulations which employs such terms as ‘decent order’ and ‘appropriate to the surroundings’ to regulate choice. But these terms are, arguably, entirely subjective. They express a narrow band of social values. Bureaucrats need to be more aware of their own prejudices and the temporary nature of the fashionable standards of their own social class, rather than assume they are upholding absolutes of any kind.

Once things are loosened up I am sure more creative and imaginative memorials will appear. It won’t matter if some are on the bling and vulgar side of taste, they will bring some cheer to what otherwise can be utilitarianly gloomy places. We need more witty epitaphs and life stories carved into stone, not just the basic information of name and dates. Otherwise what will future generations learn about us? What a dull lot, they’ll conclude from our gravestones.

Ted Harrison
Ted Harrison is a writer and artist who divides his life between the two places he calls home - West Wales and Shetland. He is a former BBC Radio 4 presenter and correspondent.