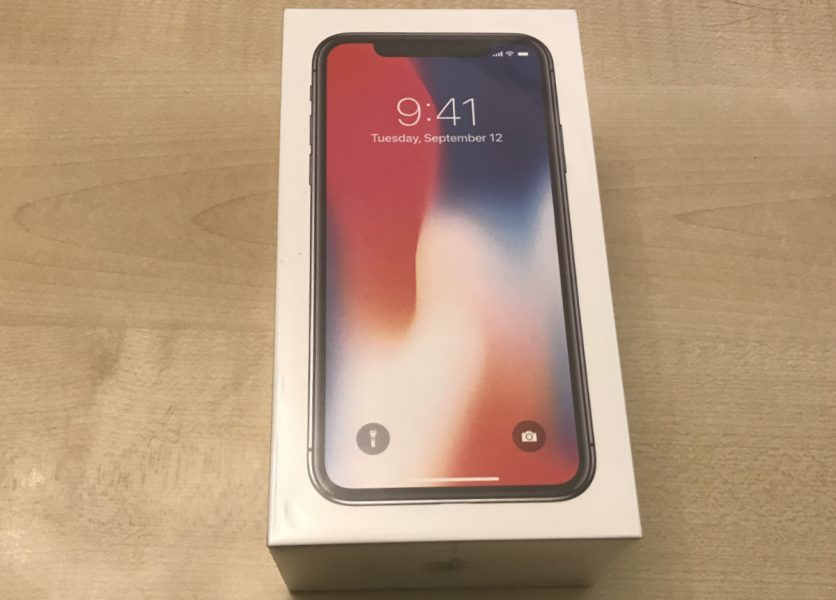 I had woken up extra early last Friday 27 October when the iphone X first went on pre-order and on the stroke of 08.00 GMT, I placed my order via the Apple website paying the inflated UK price of £999 with Apple Pay and held my breath.  Many were not as lucky with pre-orders selling out in minutes but my order went through successfully and in the process I booked a store pickup reservation at 1.00 PM today at the Apple Store on Regent Street in London.

Press and social media earlier were full of photos of thousands of people queuing outside stores in London, Tokyo, Sydney and around the world eager to get their hands on Apple’s most expensive smartphone so far. When we arrived at 1.00 PM for our appointment thankfully the queues had died down but the store was still packed to the gunnels and the whole pickup process from start to finish did take 2 hours from arrival to walking out the door £999 poorer.  Looking around at others eager to get their hands on the iPhone X the shop appeared heavily male dominated, at least when we were there.

The buzz around the Phone X launch today reminded me of the excitement associated with previous launches of some of the first iPhones, which had all but died out in recent years. Apple has said that demand for the iPhone X was “off the charts” and it certainly felt like that in the store today.

Once back in the peace and quiet of my home it was time to unbox and set up this amazing device. I will be writing a full review in a few days, after I’ve had time to fully get to grips with it, but first impressions are extremely positive for me.

Putting it through the first steps of setup took about 30 minutes and Apple is making it increasingly easy to migrate data from an old iPhone to a new one with the help of iCloud.  There were some delays in the process because, for example, the factory in China obviously had not had time to update the device with the latest version of iOS 11.1 released on Monday so during setup you are prompted to update iOS which extends the process. Reconnecting with my already paired Apple Watch 3 also extended the setup process.

The iPhone X swaps the home button and fingerprint scanner for a full-screen design. Remembering no home button to press and instead having to swipe up soon becomes natural.

Facial recognition technology, which Apple calls Face ID, works better than expected. Setting it up initially did take quite a long time with two full scans of my face before it was set up successfully.  However, I have been using the phone for the past 2 hours and Face ID has worked perfectly every time and combined with swipe up it is a very convenient way of getting into your iPhone.

The new stainless steel and glass, all-screen design looks and feels beautiful in the hand. The Super Retina OLED screen with the new iPhone X wallpaper looks very impressive and you will be sure to get jealous glances from your friends.

A lot of commentators have picked up on the notch at the top used for the Face ID camera which looks so un Apple-like, it does look strange to me on first impressions and I think Apple will quickly improve this.

Below the keyboard, where the home button is on all previous iPhones, there is a lot of blank real estate that also looks strange. Again, not like Apple and sure to be improved upon in the future.

I find the overall size of the iphone X perfect in my hand. It is a nice increase on the size of my old iPhone 7 but not as heavy and big as the iPhone 8 Plus, which is too big for me. I would say Apple have hit the sweet spot with the size of the iPhone X.

Accessories and extras Apple include inside the retail box of the iPhone X include:

Look out for my full review of the iPhone X in the next week.

In the meantime after an exciting and exhausting day I am going to take my sexy new baby to bed and I hope she will still recognise me in the morning!