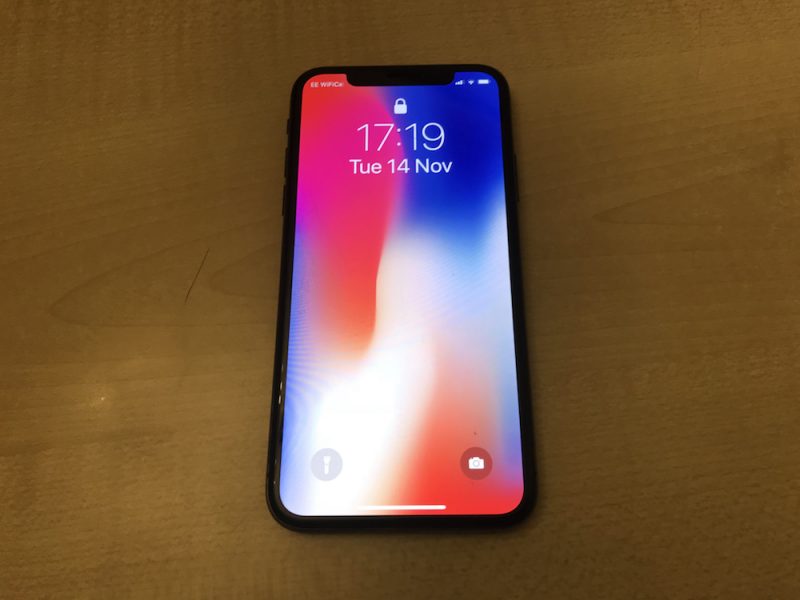 The first thing to say about Apple’s new flagship iPhone X is that it is very different to any iPhone released over the past 10 years. Different in terms of design, look, feel, navigation, features and capabilities. At £999 for the 64 GB version, it is also the most expensive iPhone ever released.

Included in the box you will find:

One out of the box initial setup was very easy. iOS 11 has Automatic Setup, which is a feature that allows you to quickly and easily transfer information from your old iPhone to your new one. As soon as I power up the new iPhone X, with my old iPhone 7 close by, a message comes up on the 7 saying “set up new iPhone” and a pairing process is initiated. Everything is synced including Wi-Fi details, Apple ID etc. Earlier in the day, I had performed a backup of my iPhone 7 with iCloud so the latest data was restored from this iCloud backup onto the new iPhone X. It really was very easy indeed.

One thing that did slow down the initial setup process was the fact that I had an Apple Watch paired with my old iPhone 7. The setup process picked up on this automatically, which was good, but it did extend the setup process somewhat having to repair my Apple Watch with the new iPhone X. I would say it added another 10 minutes to the process.

After migrating data from my old phone to the iPhone X I was invited to set up Face ID which replaces Touch ID the fingerprint sensor used for unlocking the iPhone and other things. The most eagerly anticipated feature of the iPhone X Face ID is Apple’s new facial recognition system. This new technology had received some bad press due to failures to recognise a face at Apple’s launch event in September but I found the Face ID setup process easy enough but it did need to scan my face twice before it completed the setup adding a few more minutes to the setup process.

I had a special reason to be concerned at the removal of Touch ID for accessing the iPhone. At night only I have to wear a ventilator mask over my nose to help me breathe. I was worried that when using the iPhone X late at night in bed, or early in the morning before I get up, Face ID would fail to recognise me with my ventilator mask on.

My worst fears quickly became realised when I went to bed with the iPhone X on the first night. As soon as I put on my ventilator mask Face ID stopped recognising me. Whereas earlier in the day when I was only wearing glasses it had no problem recognising me with my ventilator mask on I was asked for my login password every time I tried to access the phone. Nothing I did would trigger an ounce of recognition from the iPhone X.

It was the same situation the next day after some continued use and I started to feel a bit deflated. As soon I took off my mask there was no problem with recognition and the iPhone X next worked as intended.

However, by day three of continued use, something extraordinary happened. I think Face ID must be built with machine learning because all of a sudden with a mask over my nose Face ID started recognising me and unlocking the phone! I was hugely impressed! It had taken 48 hours of use but it was actually working!

I do think Apple needs to flag up that it may take multiple use/login attempts over several days, in extreme cases (I am an extreme though not uncommon case, plenty of people wear masks for sleep apnea) for Face ID to learn extreme changes in your face but the fact that it does is truly amazing!

Since that Eureka moment, two days on Face ID has worked perfectly for me. A quick glance at the phone, followed by a swipe up and you are in. I haven’t once missed Touch ID and I think Face ID is the future.

Face ID can be used for more than just logging in. It can be useful for app logins and for keychain passwords in Safari. It makes the authentication process of logging into websites effortless.

You can make Face ID even faster by disabling a feature called Attention Detection found in the Accessibility settings of iOS 11. When enabled, Attention Detection requires you to look at the iPhone X directly in order to unlock. Disabling the feature means you can be looking away and Face ID will still work though this is a less secure method but certainly very convenient.

After a week with Face ID I find it a more than an adequate successor to Touch ID.

The biggest difference you will notice when you get the iPhone X is the removal of the physical Home button. Instead of a Home button, there’s a new gesture that allows you to swipe up from the bottom of the display and return to the Home screen. I have found this very natural and easy to learn and think it is a great way of navigating the phone.

I love the iPhone X’s OLED display. The colours are more vibrant compared to my iPhone 7 and you really notice it when using one of the new wallpapers exclusively for the iPhone X.  They look amazing.

The famous notch at the top, which is used to house the Face ID camera and sensors, has received a lot of comment and I agree it is very unlike Apple in terms of design but after a few days of use, you simply don’t notice it.  It’s still there but it doesn’t register, it is just part of the landscape on the iPhone X display.

I have never liked very large phones and found the iPhone 8 Plus way too big for me. The iPhone X has a 5.8-inch display, which is actually bigger than the

iPhone 8 Plus’s 5.5-inch display. Most of this extra size comes from the increased height of the iPhone X, which is taller than all other iPhones. This does make reaching the top of the screen difficult with one hand, particularly when trying to access Control Center, which requires a drag down from the top right corner. Fortunately, in the Accessibility settings, there is a feature called Reachability, which allows you to drag everything down so it is within reach. For me, the iPhone X’s new display size is the perfect iPhone size for me. I love the large screen. Apple has really hit the sweet spot.  When I return to using my iPhone 7 it feels so small and stubby compared to the iPhone X.  How quickly we move on when we get a new iPhone that works well for us.

There is still so much I could say about the iPhone X.  The amazing sound that comes out of its speakers when listening to music, and the high-quality video and photos you can shoot on it.

The iPhone X is a beautiful and amazing phone.  I love the new design, size of the display, and feel of the phone in my hand. Replacing Touch ID with Face ID is a brave and bold move by Apple and for me, it has been a rip-roaring success making accessing the phone a seamless and effortless experience. It is a phone worthy of marking the tenth anniversary of the first revolutionary iPhone to come off Apple’s production line.

What do you think of the iPhone X? Let us know in the comments!