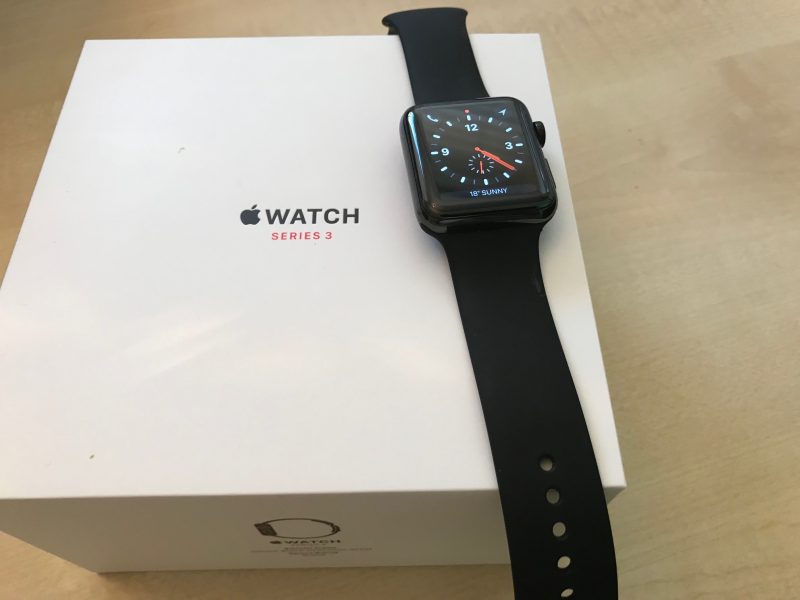 “Answer a call from your surfboard. Ask Siri to send a message. Stream your favourite songs on your run. And do it all while leaving your phone behind. Introducing Apple Watch Series 3 with cellular connectivity.”

This is how Apple describes its new Watch Series 3 cellular and it was enough for me to part with £649.00 for the Black Stainless Steel Case GPS + Cellular version – not that I am going to go surfboarding any time soon.

I have muscular dystrophy, which is a progressive physical disability; to all intents and purposes my arms don’t work due to severe muscle weakness and I need to access my smart devices a lot of the time by voice.

For many Siri has become the gateway to so much that you can now do on your Apple devices by voice alone – checking the weather, setting a timer, making a phone call, sending a message. However, for me, because of my physical limitations, Siri is quite literally indispensable; it is the only option I often have to make calls, send messages, play music and so on. There is no plan B for me.

On the Watch Series 3 Apple claims Siri is: “the intelligent personal assistant that helps you get things done. Siri can send your messages, place calls, get directions, and more”.

However, it is not “always on” on the Watch Series 3, always listening out for that Hey Siri command. As I quickly found out soon after I bought the Watch Series 3 users need to physically raise or twist their wrist to wake the Watch face in order to activate Siri.

As Apple explains in the instruction manual, which I didn’t read prior to purchase, there are currently two ways of activating Siri on the Watch Series 3:

However, what if like me you are physically disabled and can’t raise your arm, or twist your wrist, enough to activate Siri? It means it is impossible to use Siri on the Apple Watch Series 3. You are quite literally disenfranchised from all the wonderful things this device can do – calls, messages, play music etc.

My Watch Series 3 isn’t faulty and is behaving as intended in this video. It’s just I don’t have the muscle power in my arms to move my wrist enough to activate the watch face and trigger Siri, and touching the watch face at all when it is on my wrist is completely impossible for me.

I realise battery life on the Watch Series 3 is probably the issue here. The iPhone has a much bigger battery so can be set to listen out constantly for the Hey Siri command. But surely Apple could offer this as an optional setting in accessibility settings for the physically disabled to access Siri exclusively by voice but with a warning that having it constantly on listening out for the command Hey Siri will drain the battery? At least we could then make a free choice if we want to take advantage of such a feature.

Alternatively, Apple could introduce some custom sensitivity settings for the built in accelerometer where physically disabled users could individually calibrate the amount of raising or twisting of the wrist necessary to wake the screen on the watch to activate Siri. This way people like me with very weak arms may have a better chance of waking the screen and thus controlling Siri and Watch Series 3, and doing all the exciting things Apple claims like answering a call from my surfboard, (or wheelchair even), asking Siri to send a message, and streaming my favourite songs on my ride.

Digging deeper into the Apple Watch Series 3 I am very disappointed with the lack of accessibility features for physically disabled users in comparison to those for visual or hearing impairments.

Now that the Watch Series 3 is a stand-alone cellular device where you can make and receive phone calls why isn’t there an auto answer setting to help users who cannot touch the Watch Series 3 face due to muscle weakness or paralysis to answer incoming calls?

Last year I wrote about this subject in relation to the iPhone and iOS 10 on a leading technology website and the article received a lot of feedback. I am sure it embarrassed Apple somewhat because lo and behold when iOS 11 was released in September it came with auto answer for incoming calls! However, Apple have done nothing subsequently to publicise what is a very important feature for people like me and you will find no mention of it on the Apple website, or the iPhone user guide, or even the accessibility section of their website.

I should imagine that adding an auto answer feature to the Apple Watch Series 3 would not be difficult to implement but ignorance, lack of thought, and lack of consultation with user groups, probably explains why the Watch Series 3 does not have auto answer.

Apple’s implementation of auto answer in iOS 11 is on the conservative side. It would be useful to be able to screen calls either by restricting the answering of calls to either specific contacts or a white list – a facility originally implemented on high-end Nokia smartphones 7 – 8 years ago! It would be also useful to be able to toggle auto answer on and off via Siri as you can do with the Bluetooth setting at the moment. After all, if I can’t touch the watch face to answer a call I can’t touch the watch to switch auto answer on or off, which can be an inconvenience in certain situations.

There are lots of considerations the company who is said to think of everything has not given any thought to when it comes to its accessibility features. Emergency SOS on the Watch Series 3 is another feature that would be really useful and give me independence and peace of mind but again it is not accessible to me. With Emergency SOS, you can quickly and easily call for help and alert your emergency contacts. In theory it should be a great feature for owners with health issues and personal safety concerns but the problem for me is you need to be able to press and hold the side button on the Watch until the Emergency SOS slider appears. If you are unable to do this you can’t use your Watch to call the cavalry when you’re in trouble. There is therefore absolutely no danger of me being one of the watch owners who are accidentally plaguing emergency services with a deluge of false emergency phone calls from Apple watches.

Apple is in the business of producing gadgets for the mass market. They are not a disabled product company. I get that. However, I believe large corporations that make billions in profits could and should be doing a lot more to make their products more inclusive to everyone.

Apple it seems is in agreement. On its website it claims it believes that technology should be accessible to everyone. Its bold claim is that it: “doesn’t design products for some people or even most people. We design them for every single person”.

Well forgive me Apple for sitting alone in my apartment, in my wheelchair, while my carer is out at the shops, and I can’t activate Siri on my Watch Series 3 to turn the heating up because I am cold, switch the lights on because it’s getting dark, play music because I want to be entertained, or God forbid summon help in the case of an emergency. I can’t even answer a call from my carer should she phone to ask me if I’m okay.

In my humble opinion Apple has fallen well short of its claims on accessibility and designing for every single person in relation to the Watch Series 3 cellular. There are no features to help people like me control the Watch Series 3. With bold statements like this you are inevitably setting yourself up for failure because disability is so variable. Blind users may be happy with the accessibility features Apple offers but I can only speak from the standpoint of a physically disabled user and for me they fall well short of what a company like Apple should be doing, is capable of doing, and claims it is doing.

It’s a pity because the Watch Series 3 is a huge missed opportunity for people like me. Wearable technology can have so many positive uses for disabled and elderly people promoting security, independence, and peace of mind. Apple doesn’t appear to be consulting end users enough and including features and workarounds for them to take advantage of. It is a real concern that it appears these issues are not on Apple’s radar.

I have raised my observations with Apple’s accessibility department and received this standard reply: “We appreciate your feedback about Watch Series 3, and will pass this information along to the appropriate team for consideration”.

As the iPhone X goes on pre-order I am also worried about Face ID and whether it will recognise my face when I wear a ventilator mask in bed at night. An Apple customer adviser has told me Face ID will learn my face over time in a range of situations, glasses on, glasses off, or ventilator mask on ventilator mask off, but based on my experience with the Watch I worry this is something that Apple has also not considered. As long as Face ID works for me I will be happy because sticking Touch ID, the fingerprint sensor, on the back of the iPhone, as was rumoured at one point, would have put me out of the game completely!

The overall point I am making is that as technology races ahead at ever more lightning speed it’s important that companies like Apple remember all their users and loyal customers when developing their impressive technologies. Ignorance shouldn’t be a byword for a missed opportunity.

Tech companies need to consult more widely when developing their latest gadgets because physically able and brilliant young engineers, sat in the impressive Apple Park HQ in Cupertino, California, whatever the level of genius, cannot possibly know and understand how people like me are forced to live our lives. Considerately designed technology that is well researched can literally make or break lives.

I’m not going to ditch my Apple Watch. I had enough time during the 14-day return period Apple offers with online purchases to consider doing this. I am going to trust Apple to do the right thing in the coming months as they update Watch OS and hopefully they will get to read this common sense feedback. After all, last year they appear to have listened on auto answer.

I can’t end this without acknowledging that the Apple Watch Series 3 cellular is a hugely impressive device. If you can get Siri to work it is a big improvement on Series 2. Now it talks back to you makes it a powerful feature. Being able to make and receive cellular calls independent of a tethered iPhone is nothing short of amazing. The improved heart rate monitor, which is linked in with the health and activity apps, also has tremendous uses. Apple Watch’s wheelchair mode puts people with physical disabilities on a level playing field with other athletes. It makes it possible to track wheelchair exercise just like you would a typical run. Including this feature is a nice touch and has to be commended.

Tim Cook, Jonathan Ive, and your brilliant technicians at Apple, this is the second year running I have had to blow some holes in your accessibility claims. I think you could do with a consultant on designing for physically disabled users. You can reach out to me any time – that is if only I can get Siri and auto answer on your Watch Series 3 to work!