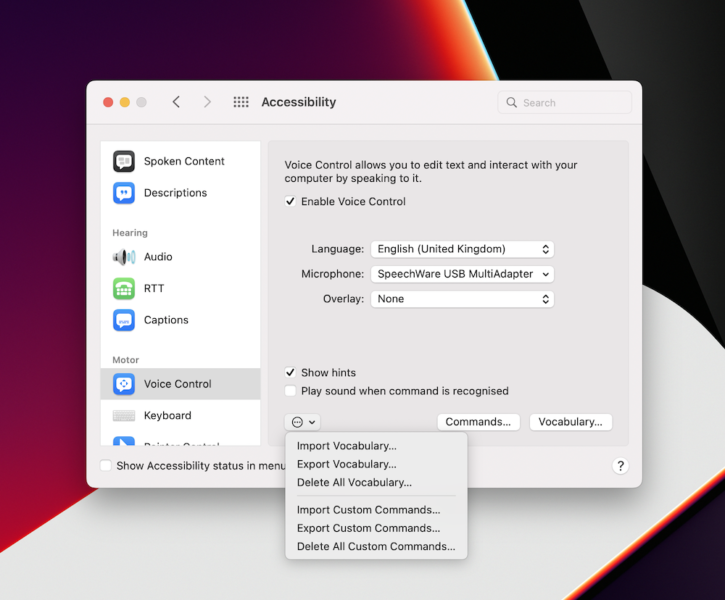 The third update to macOS Monterey for Mac computers was released last week. Among the headline grabbing new software tricks in macOS 12.3 is Universal Control, a feature that lets you control multiple Macs and iPads using a single mouse, keyboard, and trackpad.

However, another feature of interest to Mac accessibility users made a quieter debut in macOS 12.3. Although it wasn’t shown in the release notes, its been added in macOS Monterey 12.3.

Voice Control is designed to allow people to control their Mac using voice commands, rather than a mouse or trackpad. Text can also dictated rather than typed. Both features are important to those who don’t have full use of their arms.

Voice Control and dictation on Apple devices work offline. However, this causes a problem when you replace your Mac, as there has been no way to transfer your custom commands and vocabulary to your new computer, until now.

In macOS 12.3 you can now import or export Vocabulary and Custom Commands in Accessibility on Mac from a new drop-down menu visible as soon as you open Voice Control.

It’s a long awaited improvement. I have been calling for this functionality since Voice Control was launched three years ago and most recently last August 2021.

If you want to find out more about the new feature Apple has just released a support document on creating, importing and exporting a custom vocabulary for Voice Control on Mac.

An example Apple offers in this support document is if you use CAD software you can enter terms such as DIMSTYLE to ensure the words are entered correctly when you use Voice Control.

It’s the first time I recall Apple acknowledging disabled people may need to use Voice Control professionally, going beyond dictating a simple one line iMessage with a happy birthday emoji.

Voice Control is a great application, especially for navigating a Mac computer with just simple voice commands. It’s to the company’s great credit that the tech is included free with every Mac, iPad, or iPhone. However, other long-standing issues with Voice Control, and dictation in particular, still need to be fixed by Apple.

You can read about many of them here in a recent article on Aestumanda.

Here’s hoping Apple carries on listening to user feedback and Voice Control continues to evolve and improve as a good quality speech recognition application that is productive for disabled people to use.