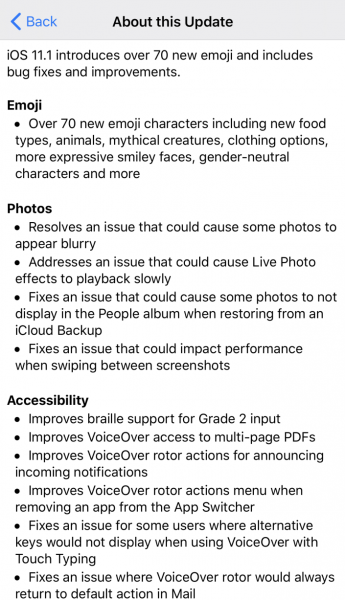 Whilst blind users and people with dyslexia will welcome several improvements to VoiceOver there is nothing new in this iOS 11.1 update for physically disabled users, which will disappoint some.

VoiceOver is a screen reader built into iOS. By using VoiceOver, users can access their iOS device based on spoken descriptions. The feature is designed to increase accessibility for blind and low-vision users, as well as users with dyslexia.

Here are the release notes detailing the Accessibility improvements that Apple provided for iOS 11.1:

Among the Accessibility features some physically disabled users are waiting for are improvements to auto answer released in iOS 11 in September. In particular, the ability to use Siri to toggle auto answer on and off by voice. Also, improvements to Apple’s conservative deployment of auto answer, including the ability to be able to screen calls either by restricting the answering of calls to either specific contacts, or a white list.

Elsewhere in iOS 11.1 Apple added over 70 new emoji and brought back the 3D multitasking gesture.

If you haven’t done so already you can get the latest software update from the Settings app on iPhone, iPad, and iPod touch.

Stay tuned to see if Apple introduces improvements to iOS for physically disabled users in the coming months.